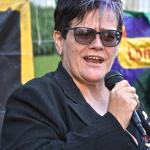 Janine has performed at hundreds of gigs around the UK, and internationally in Paris, Brussels, Berlin, Toronto, New York City, Melbourne, Sydney and Newcastle NSW.
She regularly performs at music gigs as well as spoken word events; at festivals including Edinburgh, Tolpuddle, South Downs, Glastonwick, Something Else and Shambala; at trade union, Labour Party, political and campaign events; as part of the NeurodiVERSE crew; and in solidarity with strikers alongside fellow Poets on the Picket Line; and with (other) Loud Women.

Janine Booth is an incredible performer - like a mature Kate Tempest her words simultanously entertain and cut deeply into the heart of social justice, human frailty and what it means to be an ethical person in this world, while never skipping a beat.
Magdalena Ball, Compulsive Reader (New South Wales)

Janine Booth is a 1980s poet who just happens to be a 2010s poet too: her vitriol and stage-presence are, if anything, more finely-honed than they were back then (she's put the years in, after all) and it's great to see her winning over new audiences every time she performs. And even better, she's not simply resurrecting past glories but continues to produce new material all the time. Highly recommended!
Russell Thompson, Apples and Snakes

Janine Booth brings humour to her politics. Her poetry is passionate and on point, and audiences are won over by her down to earth manner and wry witticisms. Don't let the bastards grind you dour.
Tim Wells

Janine Booth will have you belly-laughing at her witty observations on life, then takes you to a place where you truly see through the eyes of those we often don't, but need to see if we are to be better people. All done with the intensity and connection that only a fine and passionate poet can do.

As ever, Janine’s poetry charmed, wowed and inspired a packed venue. I’m always amazed how she gains and holds the attention of an audience who’ve come to watch loud music, and immediately turns them into fans. Love her to bits.
Cassandra Fox, Loud Women

Janine Booth came to Sunday Slips and blew our mind. Her words are full of honesty and power, she welcomes communication and growth! Janine shook our souls and moved the dialogue of the night to a deeper meaning. She always has a home in Berlin at Sunday Slips. Thank You Janine Booth, from the family at FREUDIAN slip club.
Liliana Velásquez

Stormed my Glastonwick festival in 2015, will go down equally well at a union rally, a poetry festival, a punk gig, or anywhere where people appreciate intelligent, angry, funny words.
Attila the Stockbroker

Janine Booth is one of the best spoken-word artists around and her characteristic humour, laced with biting truths and social commentary, never fails to move hearts and minds.
Bob Oram, Morning Star

Janine will be giving a presentation about London Underground during the day, and performing poetry in the evening.

On 17 January, 2015, join us for an exciting and unconventional new event organised by people with autism.

I will be performing alongside Attila the Stockbroker, Michelle Madsen, Tim Wells, Emily Harrison, Sam Dodd, Chip Grim & more to be confirmed.

I'll be doing an open mic and/or slam slot at this. Come cheer me on (and enjoy the other acts too)!

Tuesday 25 November 2014 was the annual, international Day for the Elimination of Violence against Women and Girls. RMT women held an event in London with speakers including a Kurdish campaigner, Unison women's committee chair, the International Transport Workers' Federation and the RMT National President. Around fifty people attended the event, and I was elased to be able to contribute by performing three of my poems on the theme of violence against women.

On 21 November, join the International Federation of Iraqi Refugees at the Institute of Education Bar for a fundraiser to raise money to support Kurdish refugees fleeing ISIS, sectarian gangs and war in the Middle East.

A three-minute burst of poetry at BoxedIn, the monthly spoken word night at the BoxPark, round the corner from Shoreditch High Street station, east London.

I'm going to have a punt at an open mic slot at BoxedIn at BoxPark, Bethnal Green Road.

I will be performing poetry at this event, which will take place at the P21 Gallery on Chalton Street, London NW1.