Why is a safe place to sleep not a basic human right? Because capitalism will only let you have a house if you pay for it and not everyone can pay for it. Poems and articles about housing and homelessness.

Video: A Tale of Two Cities (The Rich and the Towerful)

Filmed on location at Grenfell Tower by Adrianne McKenzie.

Video: Bring It Home - from Justice: Poems for Grenfell Tower Disaffected youth have long been the folk devils of society: feral, angry and disobedient; and simultaneously neglected, mistreated and alienated. The conservative establishment fears their rebelliousness crashing into its comfortable political world.
But is there another demographic which that same establishment would be well-advised to fear? Enter the Disaffected Middle-aged Women. Underpaid, pushed around, stressed out - and fighting back!
Janine Booth’s new collection brings together forty-something poems from the midst of maturity. They tell life stories and cautionary tales. They invite you to look at well-known stories from a different point of view. They watch television, stroll along the river, listen to music, work night shifts and ponder life’s scars. They take on issues including climate change, overbearing advertising, terror attacks, violence against women, the Grenfell Tower fire and the rise of the right.
Many of these poems rhyme, some don’t. Some are formal – including a sonnet, a villanelle and a sestina – but most have a rhythm and style of their own.
Janine Booth writes to amuse, to provoke thought, and to cheer on important struggles. Now, with the Disaffected Middle-aged Women, she is raising an army – and entertaining the troops. Pick up the leaflet
pick up a pen
Rate on a scale of nil to ten
how broken is your heart
how much your life is rent apart
Rate your mental state
Is it three or six or eight? 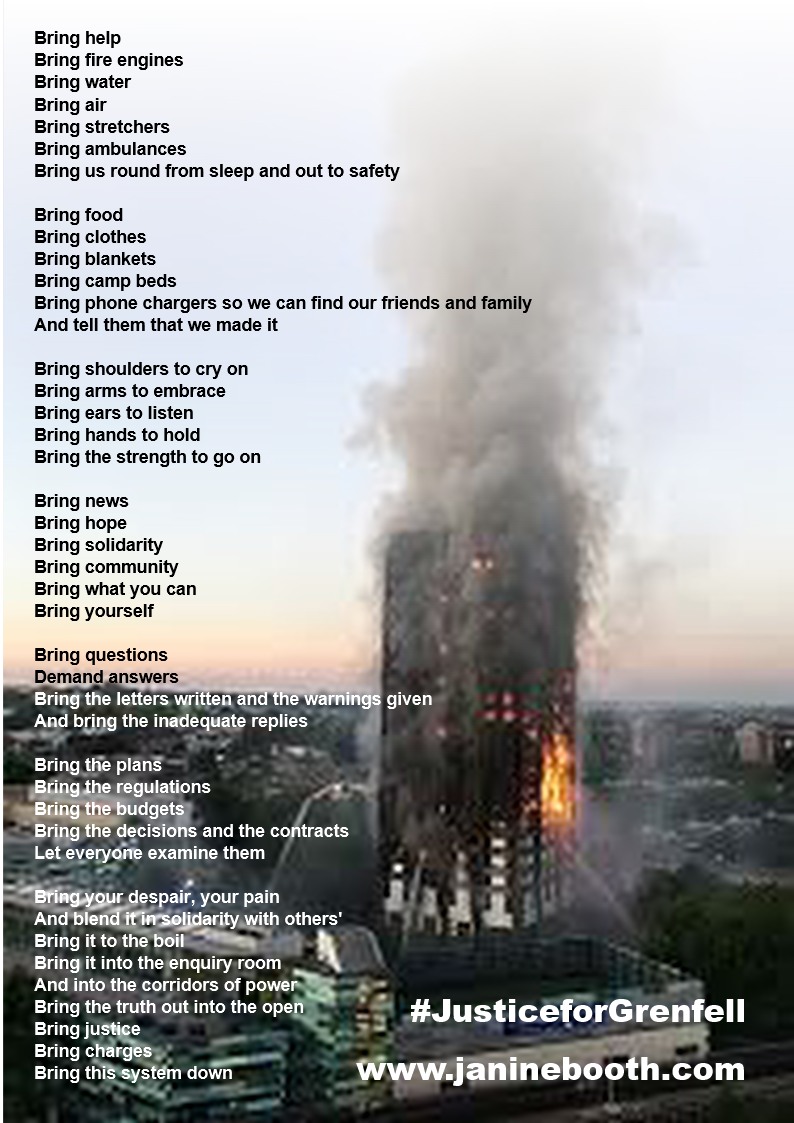 On 21 September, the White House published a letter that President Obama had received from six-year-old New Yorker Alex, offering a home to Omran, the Syrian boy whose photo had circulated widely.

Please tell the boy in the ambulance
To come and live at ours
And we will greet him in the street
With flags, balloons and flowers

The Car Lady of Prebend Gardens

With operatic majesty
Her leading man and she
Played out romantic tragedy
In harmony, in key

In January 2016, Conservative MPs voted down a Labour MP's Bill that would require landlords to ensure that homes to rent were fit for human habitation. Yes, really.

How very dare these bloody reds
Propose a law that homes I let
Be fit for folk to lay their heads
They should be glad of what they get
So come and view my latest rental -
Compact, bijou, great location
Fit for nowt but very central
Fit for human habitation