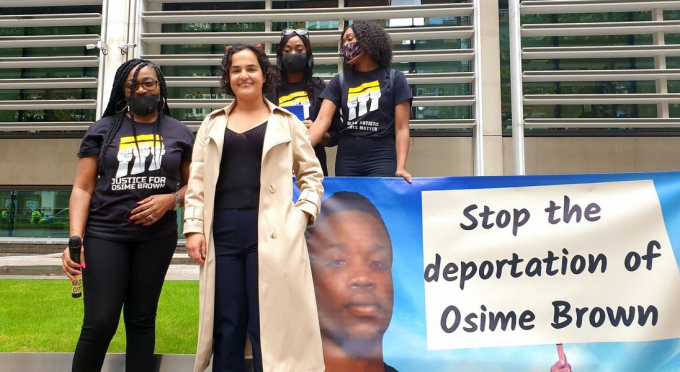 Dozens of protesters gathered outside the Home Office on Friday 4 September to demand that Osime Brown not be deported to Jamaica.

Led by Osime’s family, the protest was supported by Autistic Inclusive Meets (AIM), Neurodivergent Labour (NDL) and RMT’s London Transport Regional Council. Osime’s mother, sister and stepfather told how he had been imprisoned under “joint enterprise” law simply for being present when a mobile phone was stolen, and that an order has been issued to deport him when he is released next month.

The family left Jamaica when Osime was four years old; he has no knowledge of the country and knows nobody who lives there. Osime is mentally and physically unwell, has learning difficulties and is autistic, but his trial did not take into account how this might have led him to be in the wrong place at the wrong time.

Representing RMT and ND Labour, Janine Booth told the protest that “joint enterprise” is unjust in principle and racist in practice, as it systematically criminalises black youth.

Nadia Whittome MP gave her full support, telling protesters how the injustice of Osime’s story had moved her. Afterwards, Nadia met with campaign organisers to plan the next steps. With sufficient pressure, we can push the government to intervene and prevent this deportation.